A retrospect on the event denkmal 2018

With an extremely successful 14,200 visitor record, the 13th Leading European trade fair denkmal and the parallel international trade fair MUTEC ended on 10 November 2018. At denkmal, 448 exhibitors from 19 countries presented their products and services in every area of monument preservation and restoration.

All participants praised the quality and internationality, which once again increased. Industry experts from all over Europe came together to exchange information about the latest developments. Everyone involved was impressed by the high level of interest in denkmal's specialist programme, which this year included more than 200 events and once again more than lived up to its reputation as the industry's most important platform for further education and training.

Exhibitors and overview of the exhibition halls

Exhibitors and overview of the exhibition halls 2018 as ePaper

With an extremely successful 14,200 visitor record, the 13th Leading European trade fair denkmal and the parallel international trade fair MUTEC ended on 10 November 2018. "With an enormous response from exhibitors, visitors and experts from Germany and abroad, denkmal was able to further expand its position as the leading European trade fair this year. It is undoubtedly the technical linchpin for the preservation of Europe's cultural heritage and this year provided strong economic and political impetus," explains Markus Geisenberger, Managing Director of Leipziger Messe. "Together with MUTEC, which has established itself as an important date for museum and cultural facility operators, denkmal forms a trade fair network for cultural heritage and cultural assets that is unique in Europe". This year, the trade fair association recorded an all-time high with over 550 exhibitors from 20 countries.

At denkmal, 448 exhibitors from 19 countries presented their products and services in every area of monument preservation and restoration. The companies and institutions involved were extremely positive: "As a long-standing partner, this trade fair is extremely important to us. We are very pleased with this year's denkmal. Our stand was very well attended. In short: Everything suited us! We are very satisfied with this year's trade fair", reports Holger Schmidt, head of carpentry at Bennert. Claudia Dahlmanns, Master Gilder at R.S.P., was also enthusiastic: "With denkmal, we had a platform for numerous interesting discussions and contacts. In Leipzig you can meet colleagues, architects, building authorities, engineers - which is our main trade fair goal. denkmal is simply the largest heritage conservation fair and that's why we're here!

Around 90 per cent of the visitors were professional visitors and one in six visitors came from abroad. Visitors were also very satisfied - 86 per cent stated that they had achieved their trade fair goals.

denkmal sets the bar for quality and internationality.

All participants praised the quality and internationality, which once again increased. Industry experts from all over Europe came together to exchange information about the latest developments. Companies used the denkmal for new business contacts and international cooperation opportunities. Skilled artisan businesses and institutions in the fields of monument conservation and restoration found fertile ground for attracting young talent. "denkmal has an extremely high reputation in the industry throughout Europe. It succeeds in depicting the enormous diversity of the European-wide preservation and restoration of historical monuments. This year we were able to welcome visitors from Poland, Russia, the Czech Republic, Switzerland, Austria and Belgium," says Mariella Riedel, Project Director of denkmal and MUTEC.

Everyone involved was impressed by the high level of interest in denkmal's specialist programme, which this year included more than 200 events and once again more than lived up to its reputation as the industry's most important platform for further education and training. "The denkmal is nothing less than the European summit of technical expertise. Those who were not here made a mistake," says Dr. Markus Harzenetter, Chairman of the Association of State Monument Preservers in the Federal Republic of Germany.

Numerous other coveted prizes were awarded during the fair, above all the denkmal Gold Medal for outstanding achievements in the preservation of historical monuments in Europe. Other highlights included the awarding of the 10th Trade Fair Academy prizes, the Bernhard Remmers Prize, the national competition "European City: Change and Values" and the Leipzig Chamber of Skilled Crafts's Prize for the Preservation of Historical Monuments. For the first time at denkmal, the Peter Parler Prize was also awarded to independent stonemasons and stone sculptors for their high-quality stonemasonry skills.

The UNESCO retook the patronage of denkmal again this year. It was also the third and final official highlight of Germany's contribution to the European Heritage Year – a cooperation that benefited both sides. Successful projects were presented and exhibited, and the SHARING HERITAGE Forum attracted a large number of visitors throughout the entire duration of the fair.

"At this year's denkmal, there was an extremely positive mood and dynamic atmosphere throughout the entire trade fair. Not only did the fair provide an opportunity for professional exchange between experts from all areas of monument conservation throughout Europe, but it also provided the perfect setting for discussions with political stakeholders of the European Union. The approach of making denkmal 2018 the official highlight of the German contribution to the European Cultural Heritage Year was a resounding success", explains Dr. Uwe Koch, head of the office of the German National Committee for Monument Conservation (DNK).

Together with the experts represented at denkmal, strategies were developed to use the success of the SHARING-HERITAGE projects, which were first presented here, as a basis for future work throughout Europe. "I am enthusiastic about the euphoria and the spirit of optimism that could be felt everywhere. The European cultural heritage year SHARING HERITAGE proved to be a great campaign, especially in the sense of strengthening the DNK as an anchor of German monument conservation", reports Bernd Jäger, Chairman of Restauratoren im Handwerk e.V. (Restorers in Crafts).

The international trade fair for museum and exhibition technology MUTEC, which was organised for the second time solely by Leipziger Messe, also noted a growing popularity. 105 exhibitors from ten countries presented their innovations to operators of museums and cultural institutions from Germany and abroad. In addition, MUTEC was the venue for various prestigious conferences and meetings. 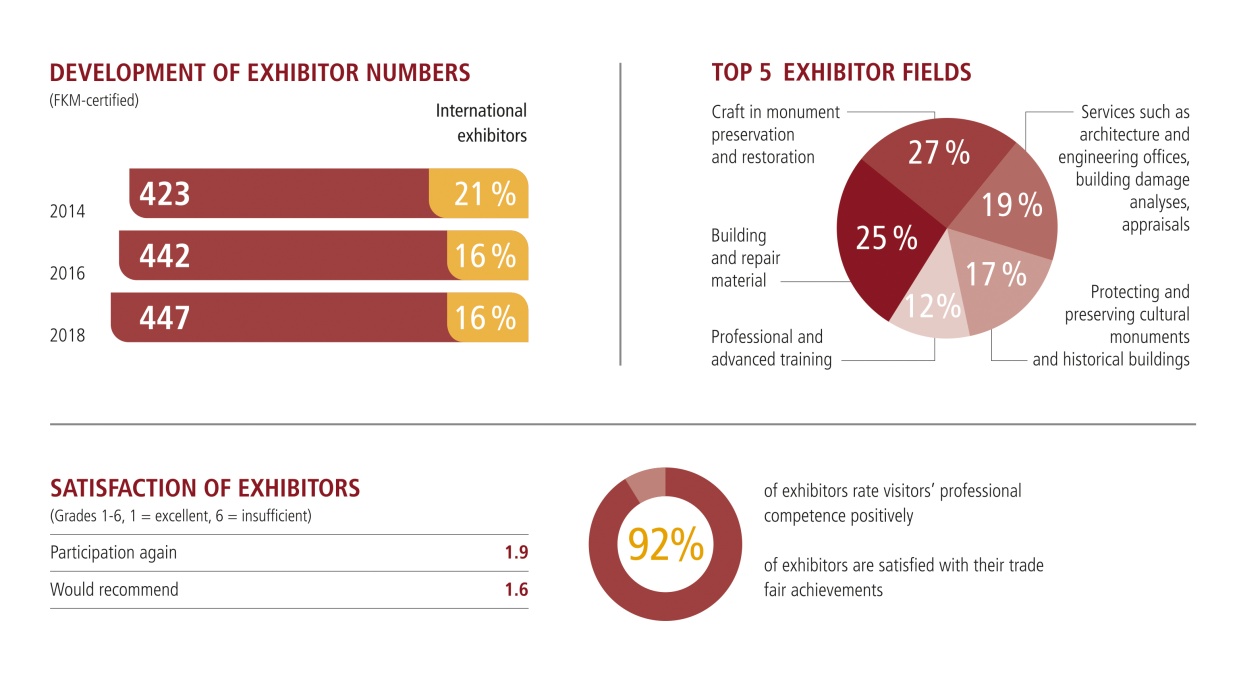